Digital evolution techniques compliment traditional wet-lab evolution experiments by enabling researchers to address questions that would be otherwise limited by:

The versatility and rapid generational turnover of digital systems can easily engender a notion that such systems can already operate at scales greatly exceeding biological evolution experiments. Although digital evolution techniques can feasibly simulate populations numbering in the millions or billions, very simple agents and/or very limited agent-agent interaction. With more complex agents controlled by genetic programs, neural networks, or the like, feasible population sizes dwindle down to thousands or hundreds of agents.

Take Avida as an example. This popular software system that enables experiments with evolving self-replicating computer programs. In this system, a population of ten thousand can undergo about twenty thousand generations per day. This means that about two hundred million replication cycles are performed in a day [Ofria et al., 2009].

Likewise, in Ratcliff’s work studying the evolution of multicellularity in S. cerevisiae, about six doublings per day occur among a population numbering on the order of a billion cells [Ratcliff, 2012]. So, around six billion cellular replication cycles elapse per day in this system.

Although artificial life practitioners traditionally describe instances of their simulations as “worlds,” with serial processing power their scale aligns (in naive terms) more along the lines of a single flask. Of course, such a comparison neglects the disparity between Avidians and bacteria or yeast in terms of genome information content, information content of cellular state, and both quantity and diversity of interactions with the environment and with other cells.

Recent work with SignalGP has sought to address some of these shortcomings by developing digital evolution substrates suited to more dynamic environmental and agent-agent interactions [Lalejini and Ofria, 2018] that more effectively incorporate state information [Lalejini et al., 2020; Moreno, 2020]. However, to some degree, more sophisticated and interactive evolving agents will necessarily consume more CPU time on a per-replication-cycle basis — further shrinking the magnitude of experiments tractable with serial processing.

🔗 The Future is Parallel

Throughout the 20th century, serial processing enjoyed regular advances in computational capacity due to quickening clock cycles, burgeoning RAM caches, and increasingly clever packing together of instructions during execution. Since, however, performance of serial processing has bumped up against apparent fundamental limits to computing’s current technological incarnation [Sutter, 2005]. Instead, advances in 21st century computing power have arrived via multiprocessing [Hennessy and Patterson, 2011, p.55] and hardware acceleration (e.g., GPU, FPGA, etc.) [Che et al., 2008].

The availability of orders of magnitude greater parallel computing resources in ten and twenty years’ time seems probable, whether through incremental advances with traditional silicon-based technology or via emerging, unconventional technologies such as bio-computing [Benenson, 2009] and molecular electronics [Xiang et al., 2016]. Such emerging technologies could make greatly vaster collections of computing devices feasible, albeit at the potential cost of component-wise speed [Bonnet et al., 2013; Ellenbogen and Love, 2000] and perhaps also component-wise reliability.

Parallel and distributed computing has long been intertwined with digital evolution [Moreno and Ofria, 2020]. Practitioners typically proceed along the lines of the island model, where subpopulations evolve in parallel with intermittent exchange of individuals [Bennett III et al., 1999]. Similarly, in scientific contexts, absolute segregation is often enforced between parallel subpopulations to yield independent replicate datasets [Dolson and Ofria, 2017].

These techniques can enable observation of rare events and provide statistical power to answer research questions. However, evolving subpopulations in parallel does not lend itself to large-scale study of interaction-driven phenomena such as

These topics are of interest in digital evolution and artificial life, particularly with respect to the issue of open-ended evolution. While by no means certain, it seems plausible that orders-of-magnitude increases in system scale will enable qualitatively different experimental possibilities [Moreno and Ofria, 2020].

In this blog series, we will investigate the scaling properties of a std::thread/MPI-based implementation of an asynchronous cellular automata model.

Our immediate goal is to establish a foundation for continuing work [Moreno, 2020] building a scalable implementation of the DISHTINY framework for studying digital multicellularity [Moreno and Ofria, 2020; Moreno and Ofria, in prep.; Moreno and Ofria, 2019]. Although the exact formulation is unimportant for the purposes of these writeups, the system might be loosely described along the lines of a grid-based cellular automata where the rule set itself is transmissible (i.e., a genetic program).

The underlying design of DISHTINY and choice of the model system profiled here is motivated by David Ackley’s notion of indefinite scalability [Ackley, 2011]. In order to meaningfully function with arbitrarily large numbers of computational nodes, he argues, a system must respect:

Any system operating within Ackley’s framework for indefinite scalability must at least bear a passing resemblance to an asynchronous cellular automata. So, hopefully, software tools developed and profiling results reported here might be of broader interest to researchers developing scalable artificial chemistry and artificial life simulations.

The backbone of the prototype implementation is a “Pipe” model consisting of an Inlet, a Duct, and an Outlet. Data is deposited via the Inlet, transmitted via the Duct, and received via the Outlet. Figure SOOPC outlines how these components relate. 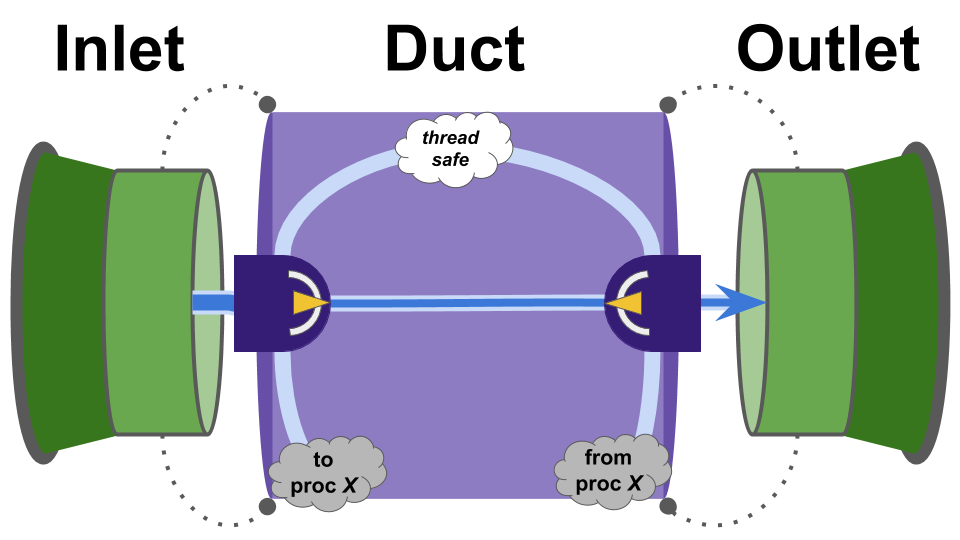 API interaction occurs exclusively via the Inlet and the Outlet — not directly with the Duct. The Duct’s underlying transmission mechanism can be changed from intra-thread transmission to inter-thread or inter-process transmission through either the Inlet or the Outlet.

Under the hood, an Inlet and Outlet hold a std::shared_ptr to a Duct. So, either the Inlet or the Outlet can be deleted while the Duct remains (as might be useful in the case of an inter-process duct). The Duct contains a std:variant of the underlying transmission mechanisms. This way, the underlying transmission mechanism can be changed out in-place.

Send operations into the Inlet are non-blocking. However, as shown in Figure SOOIF, in the current implementation if the Inlet’s buffer capacity has been reached, the send operation may drop. 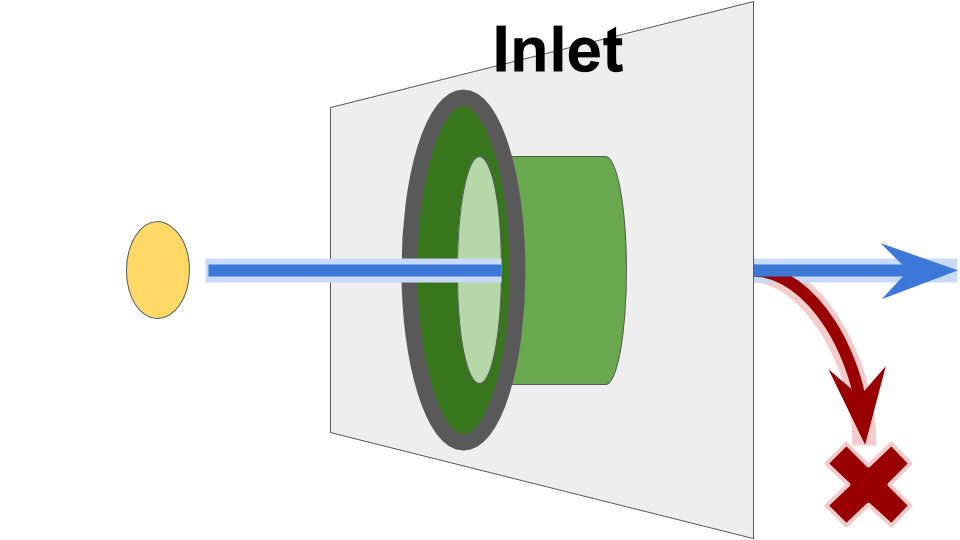 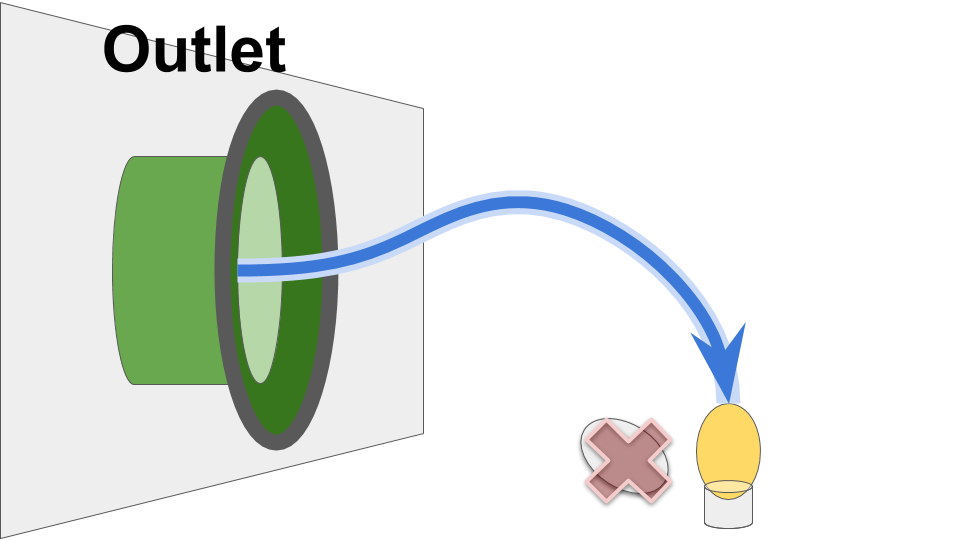 This software design aims to hide the complexity of wiring data heterogeneous computational elements. As shown in Fiure AUIFC, the exact same interface — Inlets and Outlets — performs communication within threads, between threads, or between processes. 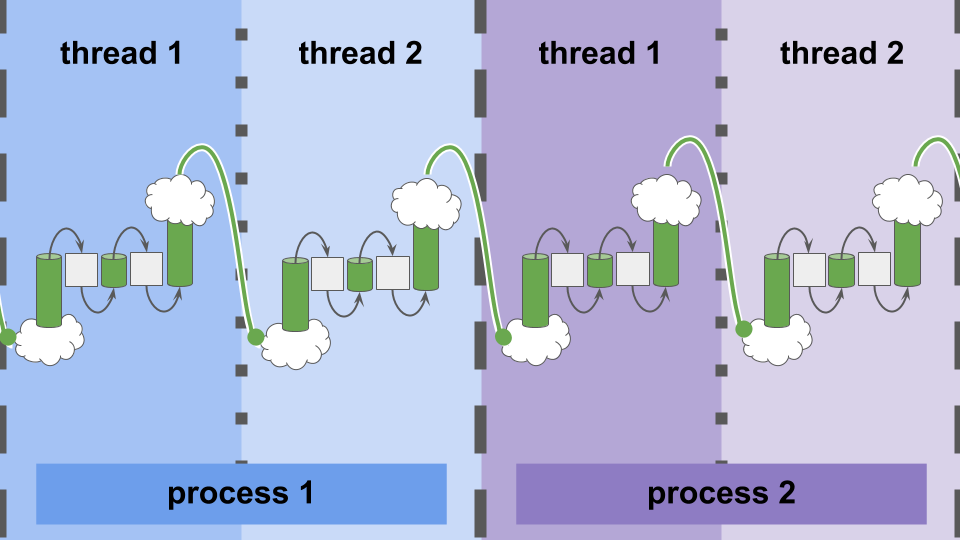 Using this “Pipe” API, we construct a simple one-dimensional cellular automata for use in profiling experiments. Two states are possible. At each update, cells adopt the state of their left neighbor — read through an Outlet. States are initialized randomly. Figure ASODC summarizes. 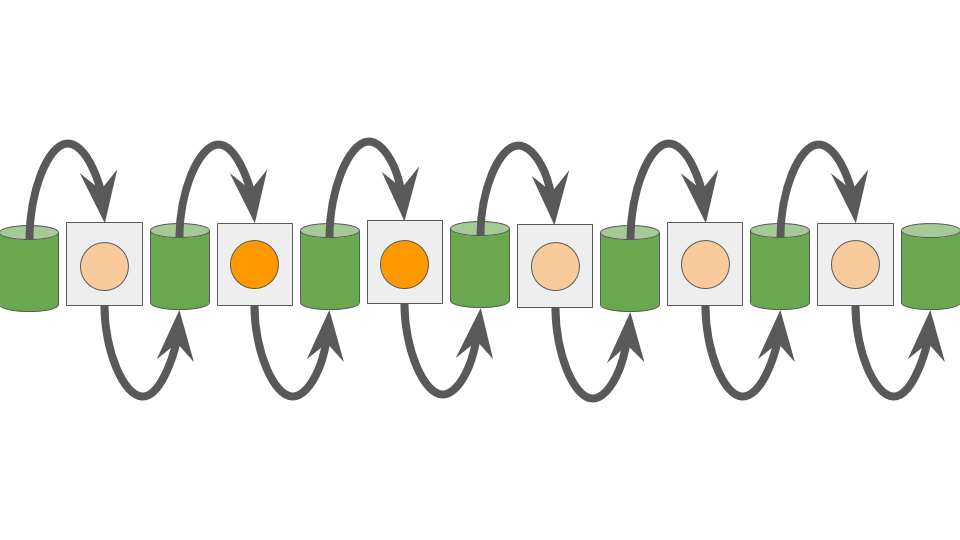 The amount of memory used per unit of computational work is crucial to the performance characteristics of software — and varies widely between applications. Because our goal is to characterize the general scaling properties our asynchronous communication implementation, we need to test broadly across memory-to-compute ratios.

As shown in Figure MPVCO, there are two levers we can pull to increase the amount of computational work in our model system. 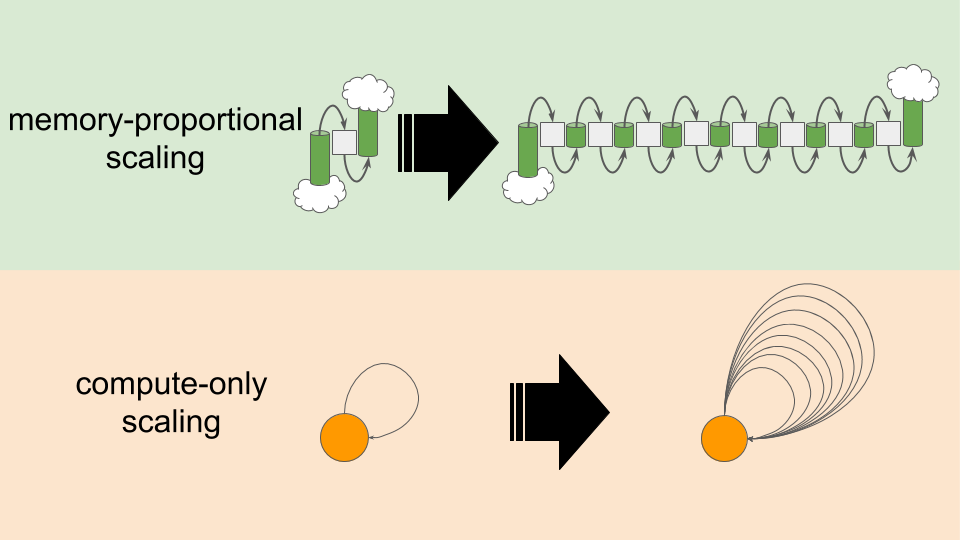 We use these two levers to perform scaling experiments along six trajectories:

Figure SSTIC summarizes the relationship of these scaling trajectories in memory-compute space. 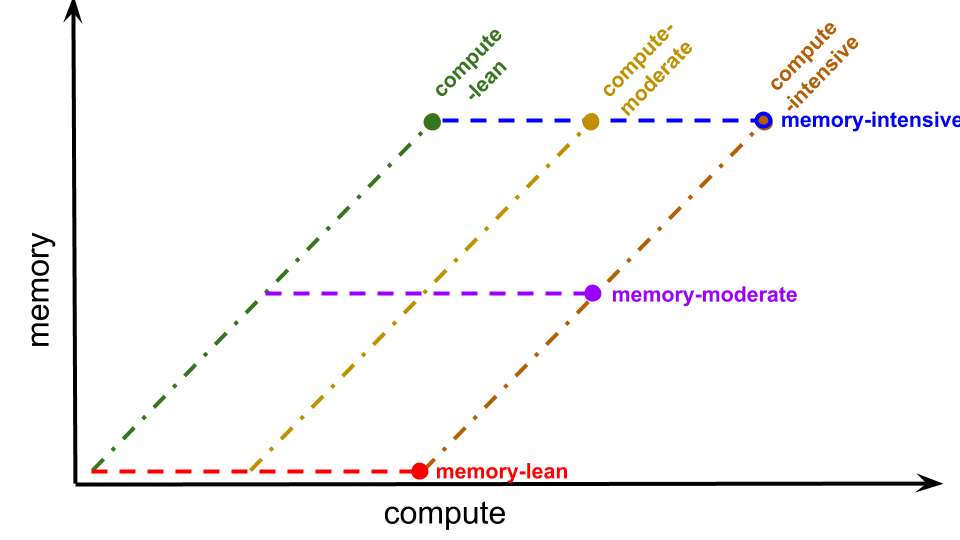 Figure SSTIC: Six scaling trajectories in compute-memory space. Each trajectory is represented as a uniquely-colored a line. The bulb end indicates the end of the trajectory.

In order to provide a baseline characterization of our model system and our experimental scaling methods, we start by evaluating serial performance along each of our scaling trajectories. We measure the amount of work performed in terms of the number of RNG calls dispatched. 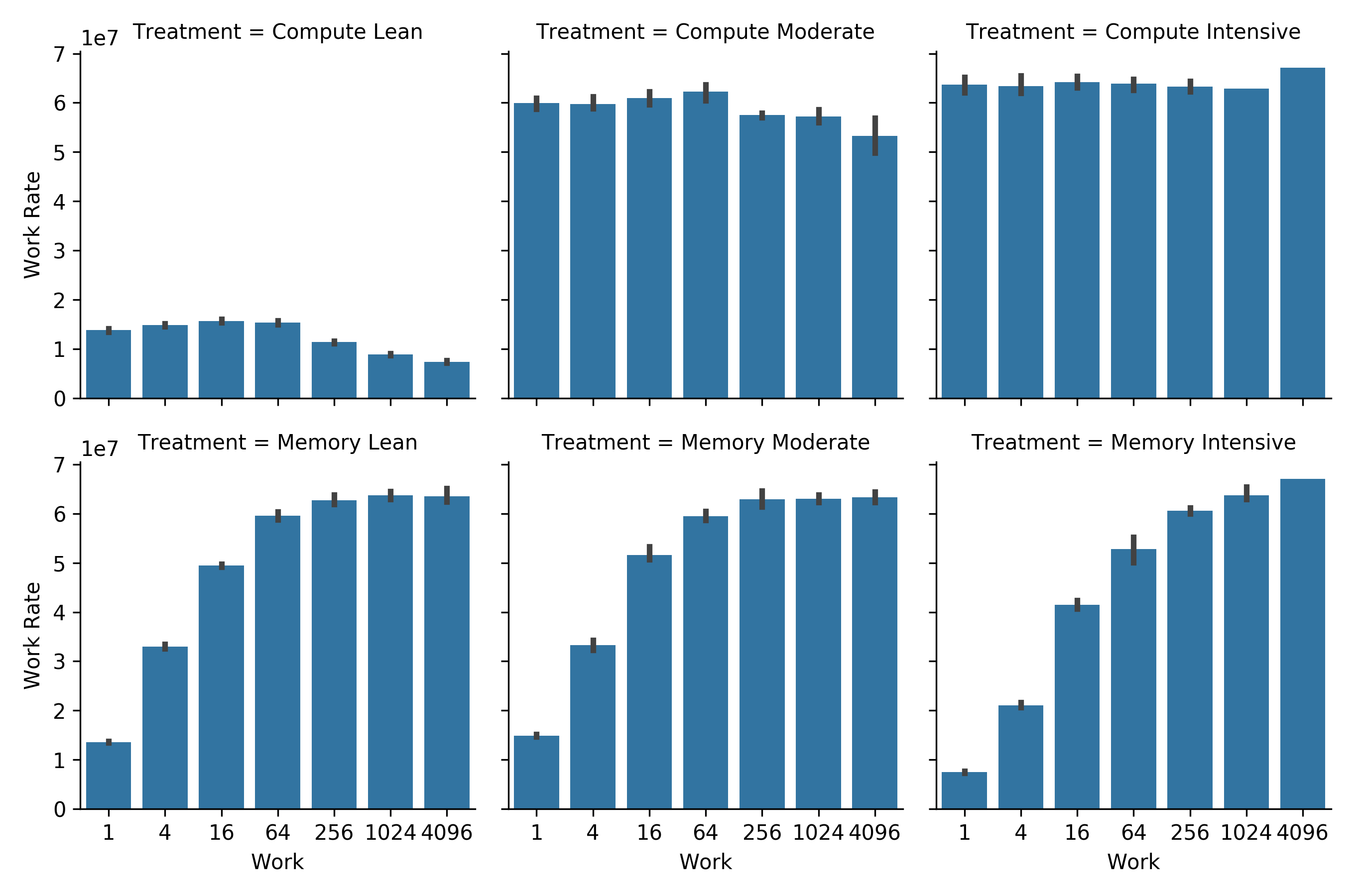 On the bottom row, the work rate increases as more computational work is performed per tile update. Exactly as expected — with more work per update a smaller and smaller fraction of time is spent communicating between grid cells and refreshing cell state.

On the top row, at low computational load (computational lean and moderate), increasing grid size decreases performance. This could be due to memory locality worsening under a larger memory footprint — when more memory sites are touched, cache is not as effective. 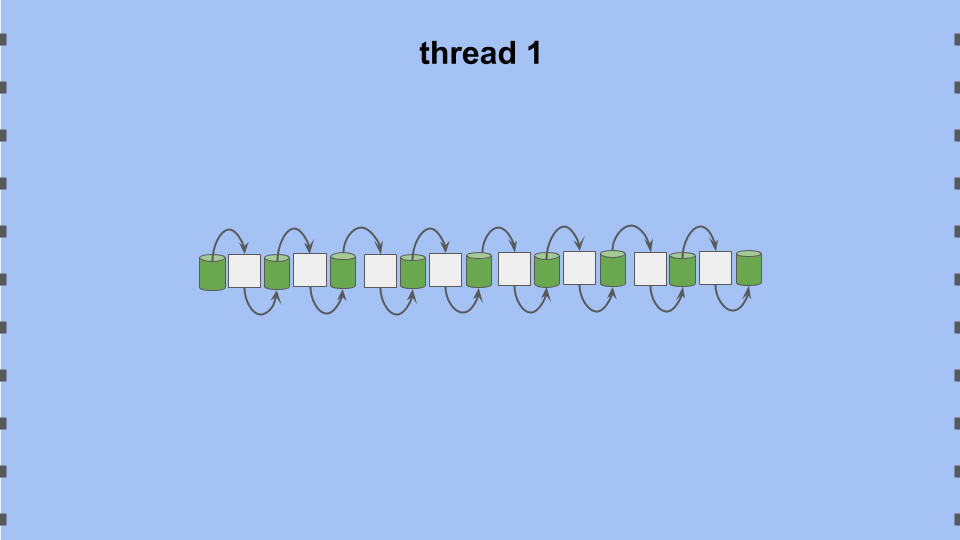 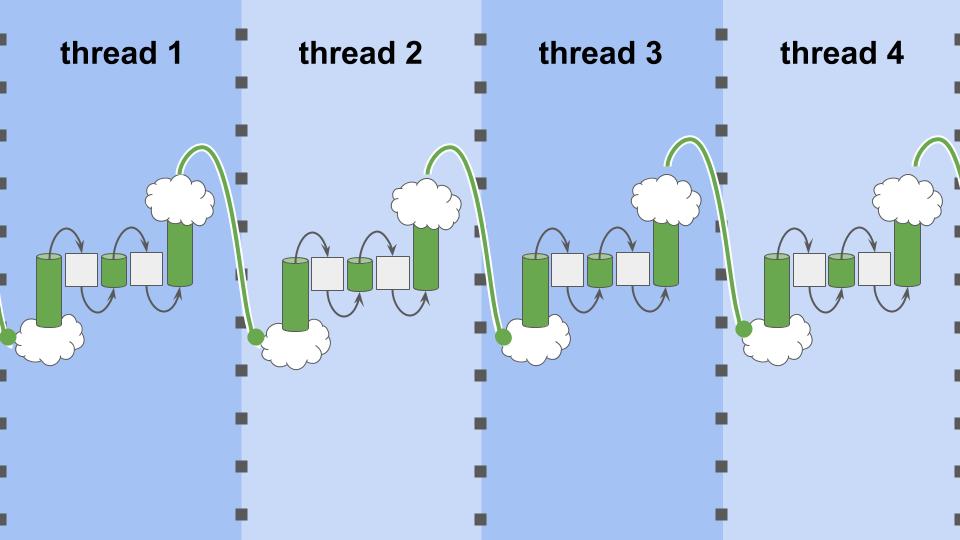 If memory locality was harming performance, we would expect the work rate to improve under multithreading because each thread has a smaller memory footprint. (Although overhead of thread creation and thread switching might potentially counteract this effect.)

These results align with the hypothesis that memory locality effects are at play. So, we have evidence that the range of memory intensities laid out for our scaling experiments is adequately broad to be representative of more memory-bound applications. In addition, it suggests the possibility that with an asynchronous approach we ultimately may be able to achieve a speedup by creating more threads than available cores to reduce per-thread work load and improve memory locality.

We’ve reached the end of this blog post. We’ve motivated and introduced the software design and evaluation methodology used, but there’s still much to cover!

Data and figures are available via the Open Science Framework at https://osf.io/je7ad/ [Foster and Deardorff, 2017].

Lalejini, A. and Ofria, C. (2018). Evolving event-driven programs with signalgp. In Proceedings of the Genetic and Evolutionary Computation Conference, pages 1135–1142.