Who else likes speedups where you just trade the family cow for magic ~beans~ flags and don’t even have to change your code base?

This week I’m profiling the scalability of the DISHTINY software. That way, I’ll be able to figure out where to focus development attention to improve scalability.

As a first stab, I decided to investigate custom memory allocators designed for multithreading. These allocators promise better thread locality and false sharing. I figured that if I was able to see a big performance boost on high thread counts using a custom memory allocator then looking more closely at how DISHTINY organizes data in memory might be more worthwhile.

These are actually pretty easy to plug-and-play with. Basically, you just build to a blah.so file and then replace the default allocator with export LD_PRELOAD=/path/to/blah.so before running your executable. No compile time changes required!

I tested with default malloc, mimalloc, and Hoard.

I collected timing data with 1, 4, and 16 threads enabled on a 16 cpu allocation on MSU ICER’s lac-247 node. Timing data was collected at three “load” (work per thread) levels: 1, 4, and 16. (Intuition: a one-thread run with load level 16 conducts the same amount of total work as a sixteen-thread run with load level 1.) Six replicate measurements of each timing were recorded.

I performed one data collection session using a variant of Script OEFFA for each of default malloc, mimalloc, and Hoard. Then, I knit the data files from each session together using Script IFDFD.

Figure RTISA compares timings using each allocator across load levels/thread counts. For all experiments with load levels of 4 and 16, including serial execution, mimalloc outperformed default malloc and Hoard (non-overlapping 95% CI) Better performance by mimalloc at load level 1 may have been partially obscured by execution time variance and measurement error due to the short (~1 second) runtimes. Overall, mimalloc, which appears to provide a nice speedup of around 10 to 20%, appears the best choice to use going forward. 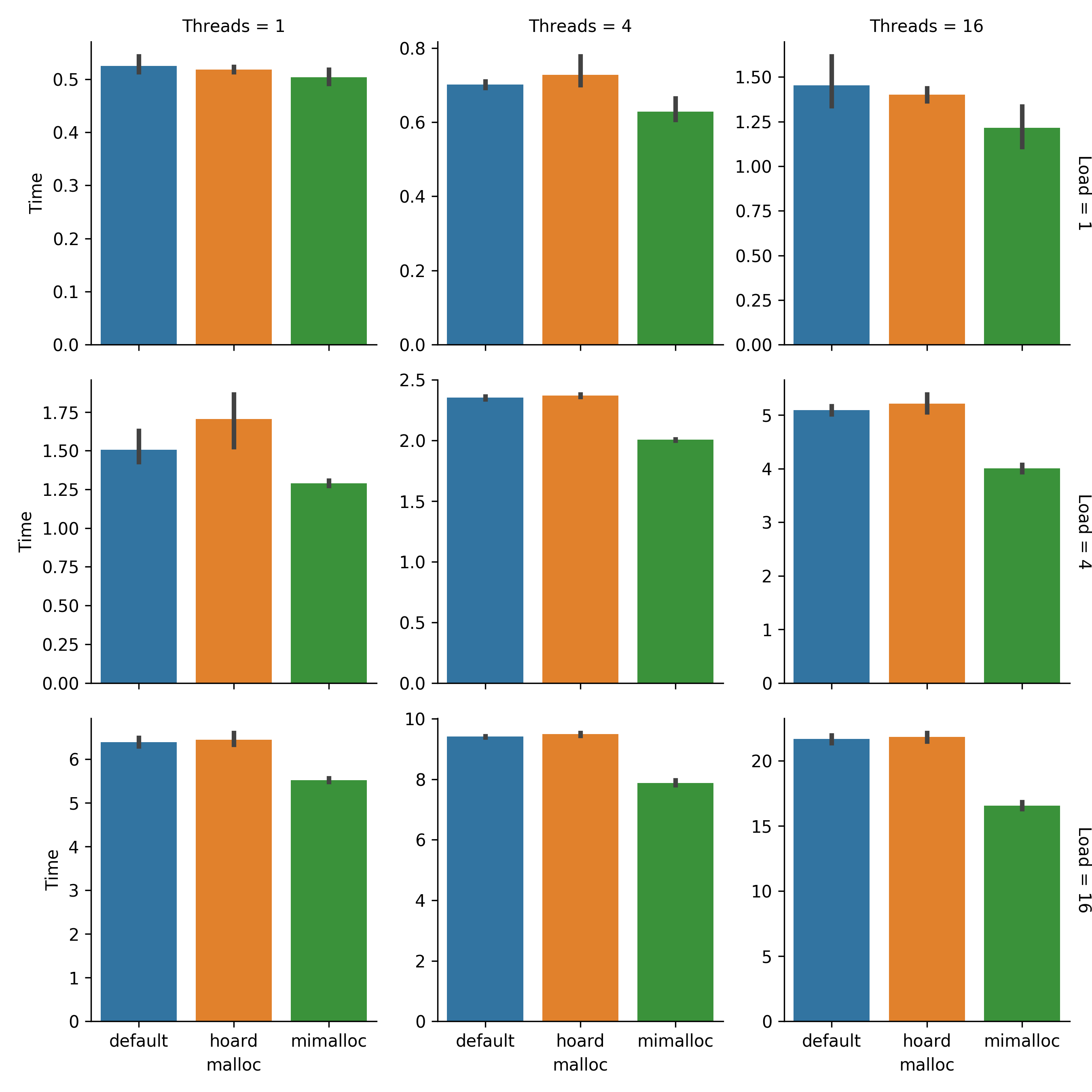 Ideally, under the same per-thread load, multi-thread timings would be identical to serial timings. However, due to the overhead of thread synchronization, this typically is not the case.

To prepare Figure COSMI, each timing was normalized by the mean execution time of the corresponding allocator and load level test with one thread. In the Threads = 1 column, as expected all serial timings have been normalized to 1.0. However, in the Threads = 16 column at load levels 4 and 16, mimalloc exhibits runtimes that are a lower multiple of serial runtime than default malloc (non-overlapping 95% CI). This indicates that mimalloc isn’t just reducing overall runtime by a constant factor: mimalloc bolsters performance more at high thread count.

Because mimalloc can alter memory layout in ways that affect performance in particular in a multithreaded context, memory layout does seem to be relevant to scaling performance. So, looking more closely at how DISHTINY organizes data in memory might indeed be worthwhile.