During the Summer of 2020, we had the pleasure of participating in the WAVES workshop and making contributions to MABE (Modular Agent-Based Evolution). MABE is a tool for evolving and analyzing digital brains. Users create and manage populations of evolving digital organisms which are then evaluated in worlds. The results of the evaluations dictate the generations of new populations by means of natural, artificial, and/or sexual selection.

The purpose of MABE is twofold: 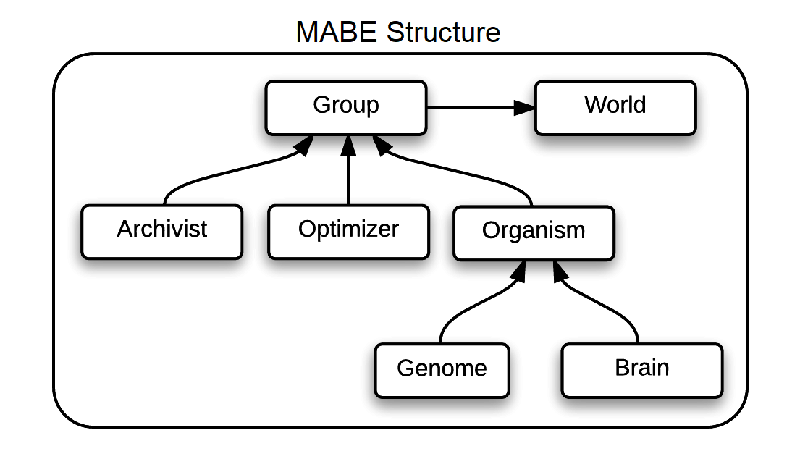 Figure MABE Structure. A broad overview of how MABE is structured, synonymous with how organisms evolve in the real world

Mutations can occur in genomes. If an organism progresses to the next generation, mutations applied to the genome introduces new genetic variation into the population. In other words, a (parent) genome generates a mutated offspring genome. There are three basic mutations that can occur:

Genomes are often large, and undergo several mutations. The Genome Class in MABE sets aside a chunk of contiguous memory for every genome for the organisms that progress to the next generation. It then copies the parent genome over to the contiguous memory, applies the mutations, and voila!

Offspring genomes are generated. Contiguous memory for genomes is assigned and written to at every next generation. If the frequency of generating offspring genomes was reduced, could the proposed method save time and memory?

Each member of the team implemented a unique solution, with different data types and structures. Linked below are blogposts that go into more detail of each solution.