Planning for the Future of MABE2

Planning for the Future of MABE2: A Summer of Documentation and Testing

​ Hello! This summer we (Lanea Rohan, ‘22 Grinnel College, and Aria Killebrew Bruehl, ‘23 Reed College) participated in the WAVES workshop through Michigan State University. We dedicated our summer to documenting and testing MABE2, an open-source research platform that provides accessible tools for conducting evolutionary computation and digital evolution research. ​ This project was guided by our wonderful mentors Acaica Ackles (documentation) and Austin Ferguson (testing).

Why Document and Test Code

​ The Digital Evolution Lab has spent countless hours developing MABE2 and preparing for its release. Proper documentation and testing are essential for ensuring that MABE2 is accepted into and used by as large of a community as possible. ​ Write the Docs, “a global community of people who care about documentation”, puts the importance of proper documentation quite plainly: ​

This is particularly important for the end-users of MABE2, especially those with less coding experience, who want to quickly run experiments without having to understand complex source code. Documentation is also important for the users who want to write their own modules or otherwise contribute to this software. Write the Docs stresses the importance of documentation for potential contributors: ​

Software must also be tested before it is released to the community. End-users will (and should) be cautious of code that has no testing framework. Without code being tested how can we expect it to perform as desired? We must provide a testing suite to assure MABE2 users that this software runs correctly. ​ Testing frameworks are also helpful for future developers who want to make sure their contributions to this software do not break any previously functioning code.
​

Prior to this summer there was no documentation for MABE2, meaning we had to familiarize ourselves with a huge library of files without any written guidance. Trying to understand MABE2 using only the source code and frequent discussions with our mentors was challenging. This made us appreciate the value of well documented software, and underlined the importance of documenting MABE2 for future users. ​ The main page of MABE2’s documentation has a more sales-pitchy feel to it. This page overviews what MABE2 is and why researchers should use it. We also provide an example project to showcase the many benefits of running an experiment with MABE2. ​ The documentation also offers step-by-step installation and quickstart guides so users can quickly familiarize themselves with the fundamentals of running a MABE2 experiment. In addition to these basics, we dive deeper into the inner workings of MABE2 by documenting:

Because MABE2 is still under active development there are some features whose implementation has yet to be finalized, meaning that for the time being, they have been left out of the documentation. In particular we did not document 🧬 genomes, 🧠 brains, or

​If you’re curious to learn more, you can check out a live version of the documentation here.

Many large projects contain complex webs of dependencies, which are files that rely on other files. This is the case with MABE2. Dependencies make deciding where to start testing difficult. You need to be sure that the code you are testing does not rely on any untested files, since they could contain unknown bugs which may lead to errors in your current code. To avoid potential errors from untested dependencies, our mentor Austin suggested that we use a “bottom up” method by starting with code that had no dependencies and working our way up to those with more.

One way to organize the system of dependencies is to “levelize” the code your working with. Levelizing is the process of organizing the files in a project based on the scaffolding of dependencies. For example, files at level 0 have no dependencies. A level one file will depend on one or many files of level 0, a level two file will depend on one or many level one files, and so on. Levelization is be a great tool to help understand how a large code base is organized.

In our case, Austin used the levelization of MABE2 to decide which files we should begin testing. We’ve included his visualization below.

One important thing to note about this levelization is that MABE2 has a library of third-party dependencies that are used throughout the source code, including Empirical. We worked under the assumption that all of these third-party resources were working correctly, and thus any error we found was occurring from within MABE2.

The process of testing is not linear, and is more involved than most people first assume. In its most basic form, the testing process can be summed up as below.

Since we both were thrown head-first into MABE2 and had little biology/evolution background, deciding how to test a specific file was pretty hard.

At the beginning, Austin gave us checklists of what to test in a file, and gave us guidance on how to test it. Once we finished his checklist, we would go through and decide if there was something that we missed.

After testing a couple of files with this method, we decided to push ourselves to come up with tests on our own. This lead to a new testing workflow, demonstrated in the image below. 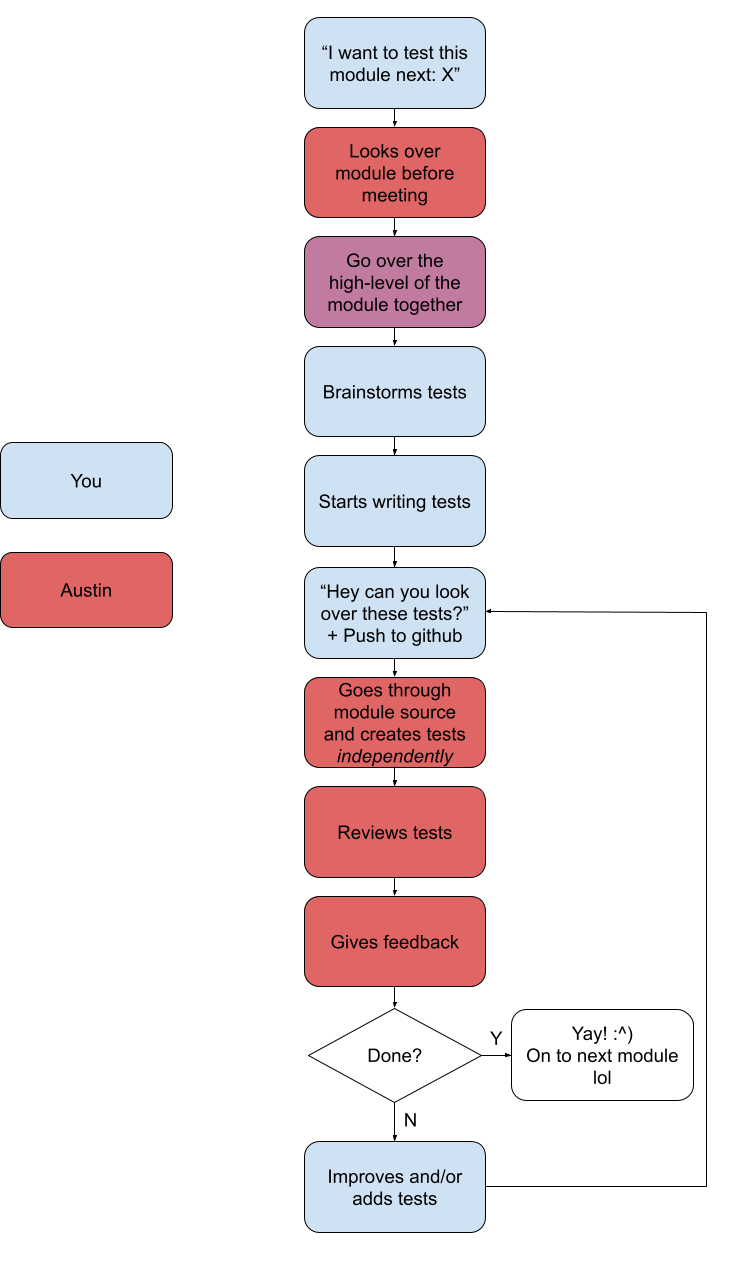 In essence, we began by meeting with Austin to do a high-level overview of the code to make sure we understood what we would be testing. Then, on our own, we created a comprehensive test suite for the specific file with a variety of unit tests. Afterwards, we would send our tests to Austin who would come up with his own independent list of things to test. He would compare his test suite with ours and give us feedback on what we missed. We would then go back and review our own tests with his advice in mind. We then repeat that cycle until all of us were satisfied with the testing coverage for the file. Then we repeat this process for the next file.

We used a testing framework called Catch2 to test MABE2. Catch2 is an easy to use C++ unit testing framework. You can check out more of Catch2 in their github. When writing out tests for MABE2, we relied heavily on Catch2’s assertion macros, which you can find here.

Throughout our testing journey, we have come to learn a lot about the intricacies of writing tests. We thought we would share a couple of tips and tricks we learned from tackling testing this summer!

Here are a couple of things that you might find helpful when testing MABE2 files! We have included some things to watch out for and bug fixes/workarounds that might prove to be helpful in the future.

At the end of the WAVES workshop, we were given the opportunity to present our summer of work at the BEACON congress. The BEACON congress is the annual meeting for researchers who belong to the BEACON Center of Evolution in Action, a consortium of affiliated universities that focuses on the study of evolution in action through an interdisciplinary lens. Specifically, BEACON aims to bring together biologists, computer scientists and engineers to both study evolution in action, as well as use evolution to solve complex real-world problems.

We attended the summer 2021 BEACON congress as both participants and speakers. We presented our talk “Planning for the Future of MABE2: A Summer of Documentation and Testing”. Below you can find both our abstract, as well as a video recording of our talk.

The second Modular Agent-Based Evolver framework (MABE2) is an open-source research platform that provides accessible tools for conducting evolutionary computation and digital evolution research. MABE2 reduces the time between constructing a hypothesis and generating results by providing a library of modules that connect to form a variety of experiments. To promote use among interdisciplinary researchers, modules are connected and adjusted via a simple text interface (i.e., the user does not need to add or edit any code). However, if the user requires modules beyond the existing library, MABE2 provides a set of practical tools for developing additional modules. With the understanding that MABE2 is a large piece of software, this summer we created a documentation guide and testing framework as part of the 2021 Workshop for Avida-ED Software Development (WAVES). In this talk, we will highlight the role of the documentation and testing framework in the MABE2 user experience through a demonstration of constructing and running a custom experiment. By creating the documentation and testing framework, we hope to make MABE2 more approachable to new users and more useful to the interdisciplinary research community.

​ We would like to give a huge thank you to our mentors Acaica Ackles and Austin Ferguson for their continued support and dedication throughout the summer! ​ We would also like to thank Charles Ofria and Clifford Bohm for their support in understanding MABE2! ​ Finally, we would like to thank all the WAVES mentors who led us in enrichment seminars and everyone who gave us feedback on our documentation!